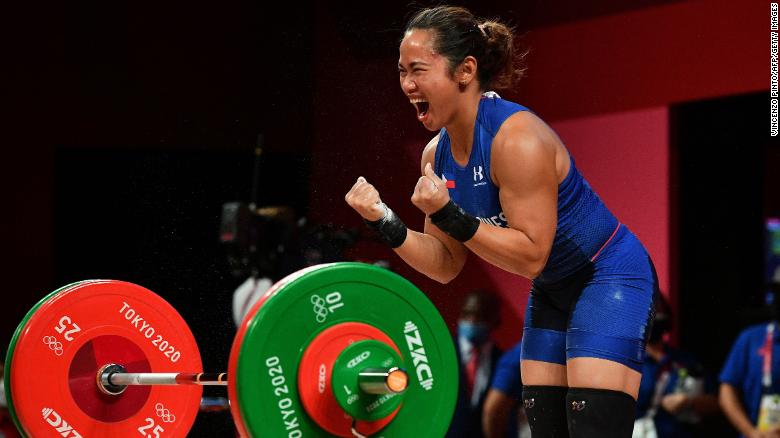 (CNN)Weightlifter Hidilyn Diaz made history Monday becoming the first athlete from the Philippines to win gold at the Olympics.

The 30-year-old set an Olympic record, lifting a combined weight of 224 kilograms, to clinch the top spot in the women’s 55-kg class in Tokyo.
Diaz burst into tears and embraced her coaches after completing the record-breaking lift. She was seen clutching her medal and pointing to the Philippines flag on her jersey while stood on the podium.
Philippines Presidential spokesperson, Harry Roque, congratulated Diaz for “bringing pride and glory” to the island nation in a statement posted to Twitter on Monday. “The entire Filipino nation is proud of you,” he said.
Prior to Diaz’s gold, the South East Asian nation of roughly 108 million had claimed just 10 Olympic medals — 3 silvers and 7 bronzes.
Diaz, who won silver at the 2016 Games in Rio, achieved a personal best to beat off strong competition from world record holder Liao Qiuyun of China, who took silver with 223 kg, and Kazakhstan’s Zulfiya Chinshanlo, who won bronze with 213 kg.
Diaz is among a number of athletes whose preparation and training ahead of the Games was disrupted by Covid-19 restrictions.
At one point, Diaz became stranded for several months in Malaysia, while en route to a competition in Peru, following the introduction of stringent government border restrictions, Reuters reported.
In a video posted to Instagram during her time in lockdown, Diaz is seen training with water bottles attached to a wooden stick.
“Yes, I do this. I carry a bottle of water for my weightlifting training. Its hard but we survive, still living the dream in my heart,” the caption read.
Source: edition.cnn.com